Here is the list of the research projects I have been working on.

Understanding the nature of the galaxies in the early Universe requires a full view of their interstellar medium by probing their molecular complexity. Therefore, we have conducted a series of line surveys with NOEMA and ALMA towards some of the brightest dusty galaxies at \(z>3\), including starburst-dominated galaxies as well as quasars. From the spectra, more than 20 molecular lines from 15 species from their rotational and vibrational spectra in each galaxy have been detected. They reveal the chemical richness and detailed properties of their interstellar media (Yang et al. in prep.).

SUNRISE is a line survey project targeting the rest-frame submillimeter (from ~ 300 GHz to THz) spectra of high-redshift dusty galaxies, based on observations of NOEMA and ALMA.

Water is one of the most important molecules in the Universe. In the gas phase interstellar medium (ISM), after molecular hydrogen, H\(_\mathsf{2}\)O is commonly the most abundant molecule together with CO in the ISM of galaxies. While it remains mostly locked up in icy grains (in solid phase) in the cold molecular ISM, it can be desorbed into gas phase in certain conditions (see e.g., van Dishoeck et al., 2013). Unlike CO, H\(_\mathsf{2}\)O can be excited via both collisions and by absorbing far-infrared photons (far-infrared pumping). The far-IR pumping mechanism makes H\(_\mathsf{2}\)O line unique probes compared to standard gas tracers like the CO line, e.g., H\(_\mathsf{2}\)O tells us not only about the gas conditions but most importantly about the physical conditions of the far-IR radiation field such as the dust temperature, optical depth and its physical size. Besides, H\(_\mathsf{2}\)O traces various a variety of physical processes such as shocks and gas outflowing. 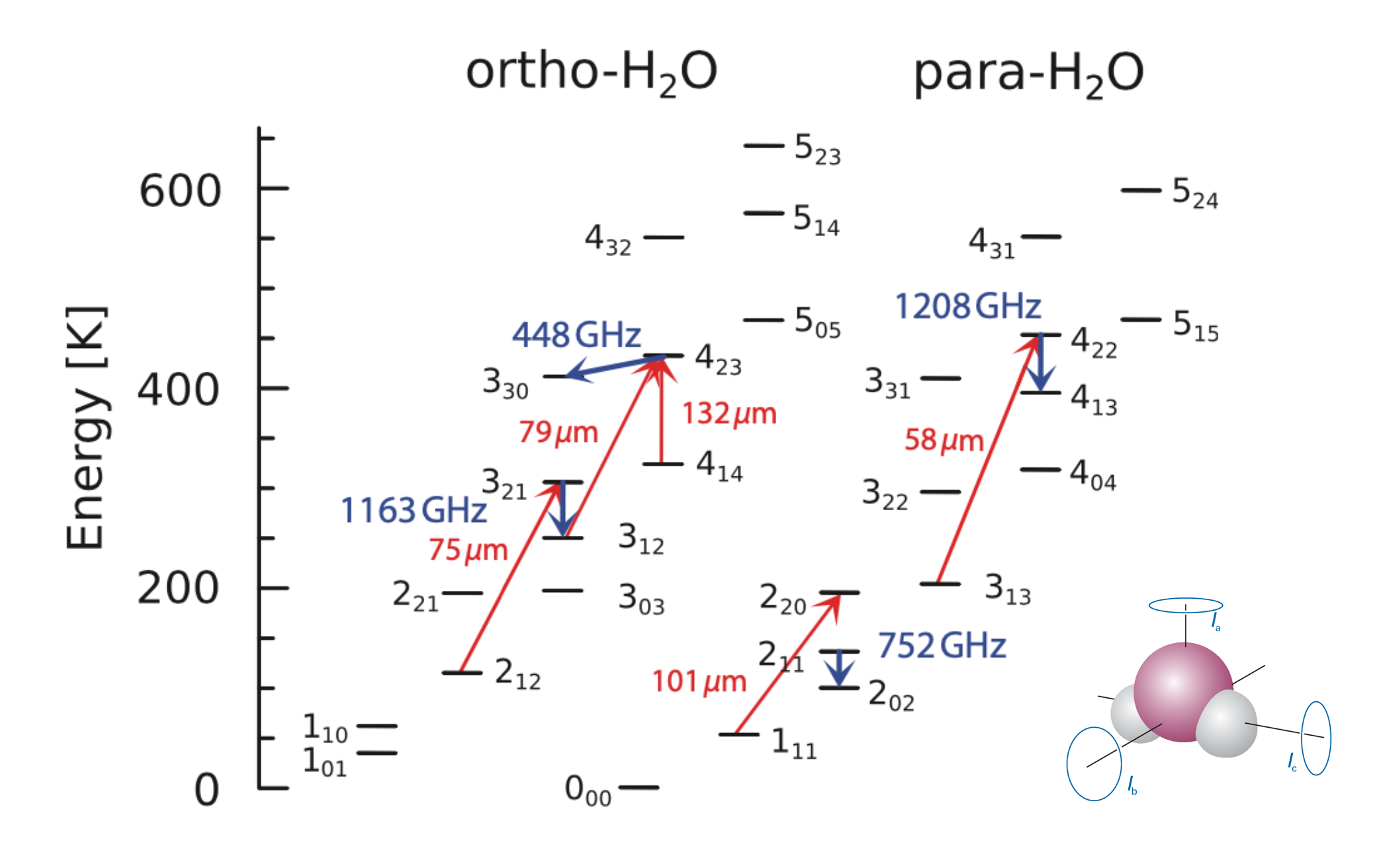 Figure adapted from Yang et al. 2020, which shows the rotational energy levels of the water molecule and the frequencies of the corresponding emission.


The first large-sample water line survey in nearby galaxies

Because of the atmosphere, it is nearly impossible to observe H\(_\mathsf{2}\)O coming from the nearby Universe from the ground. Therefore, space telescopes/observatories like ISO, SWAS, Odin, Spitzer, and Herschel are used in studies of H\(_\mathsf{2}\)O. 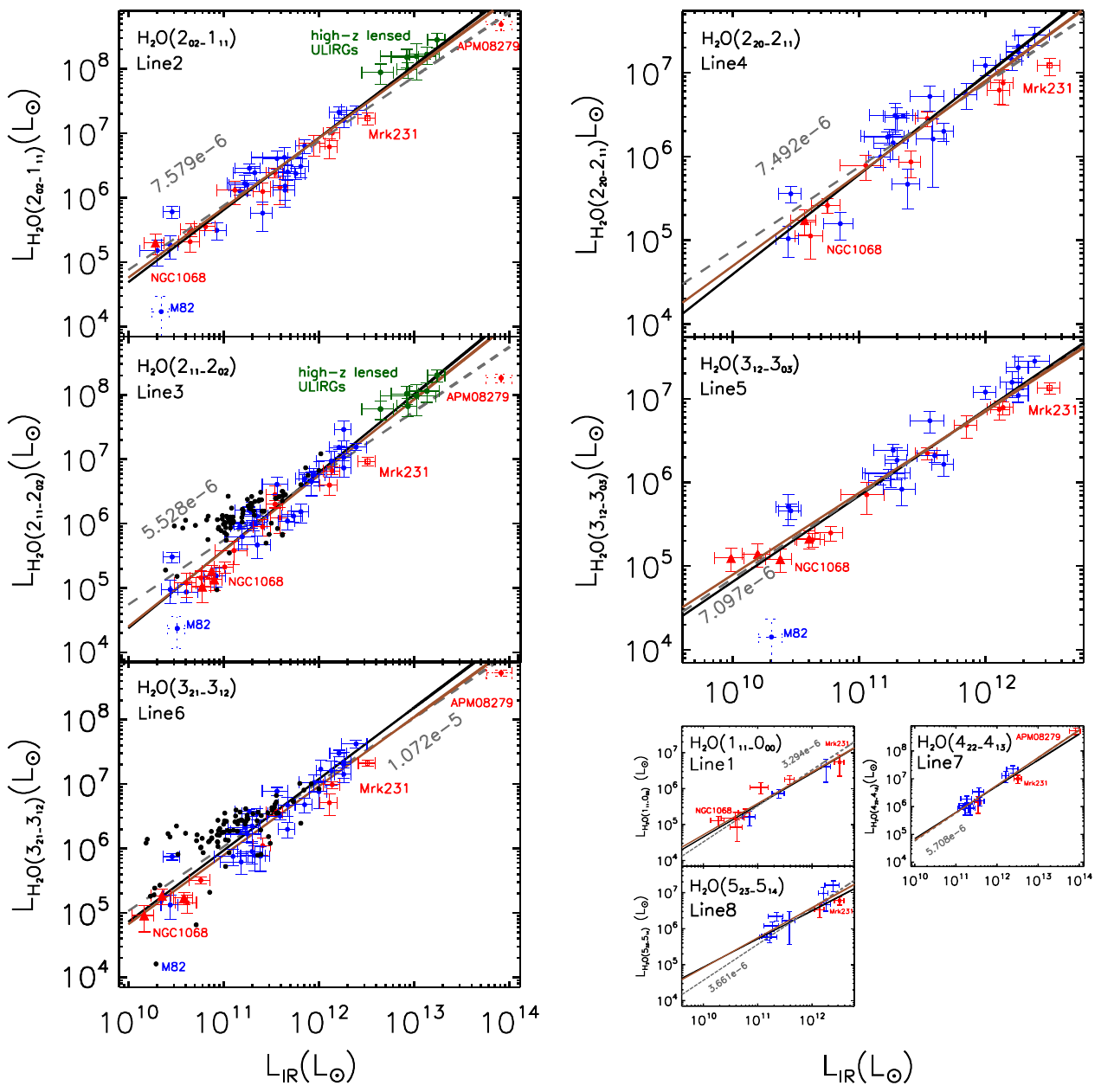 Figure adapted from Yang et al. 2013, which shows the tight correlations between the submillimeter H2O line and total infrared luminosities (integrated from 8 to 1000 micron). 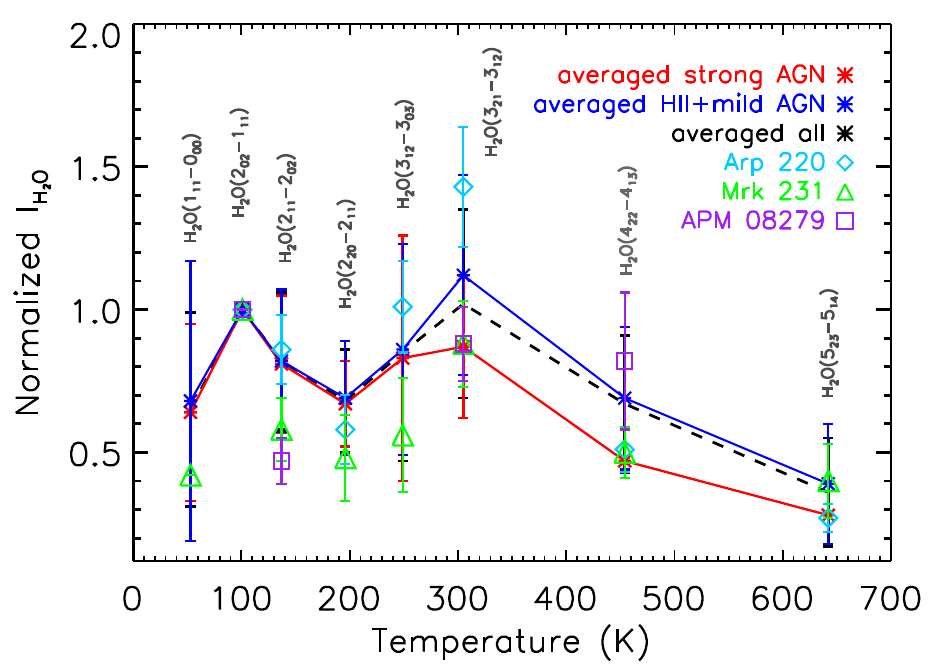 Figure adapted from Yang et al. 2013, which shows the normalized (by the flux of the 202-111 line) SLED of submm H2O lines show two peaks at low- and high-lying transitions, respectively. 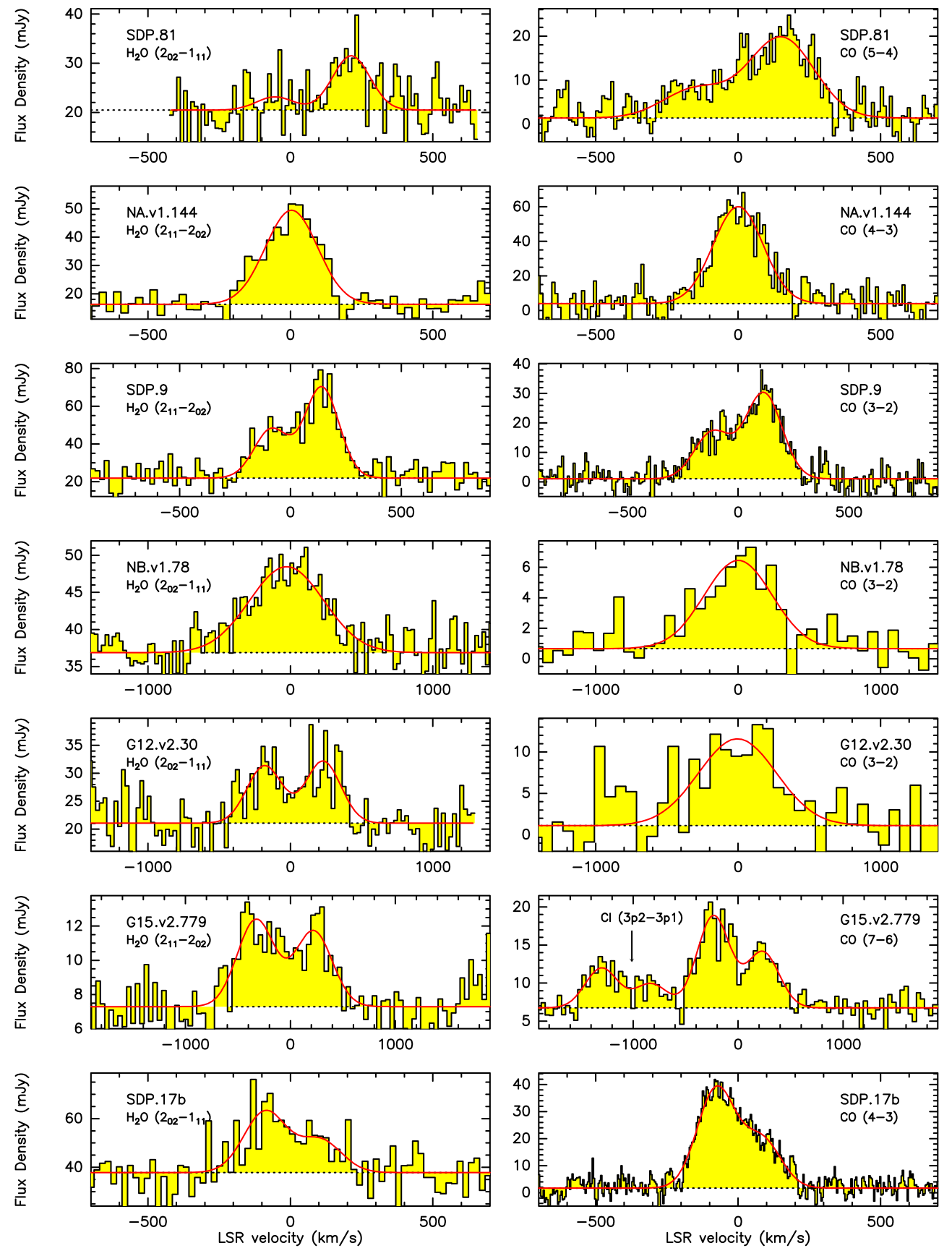 Figure adapted from Omont et al. 2013, which shows striking similarities between the profiles of the H2O and CO lines. 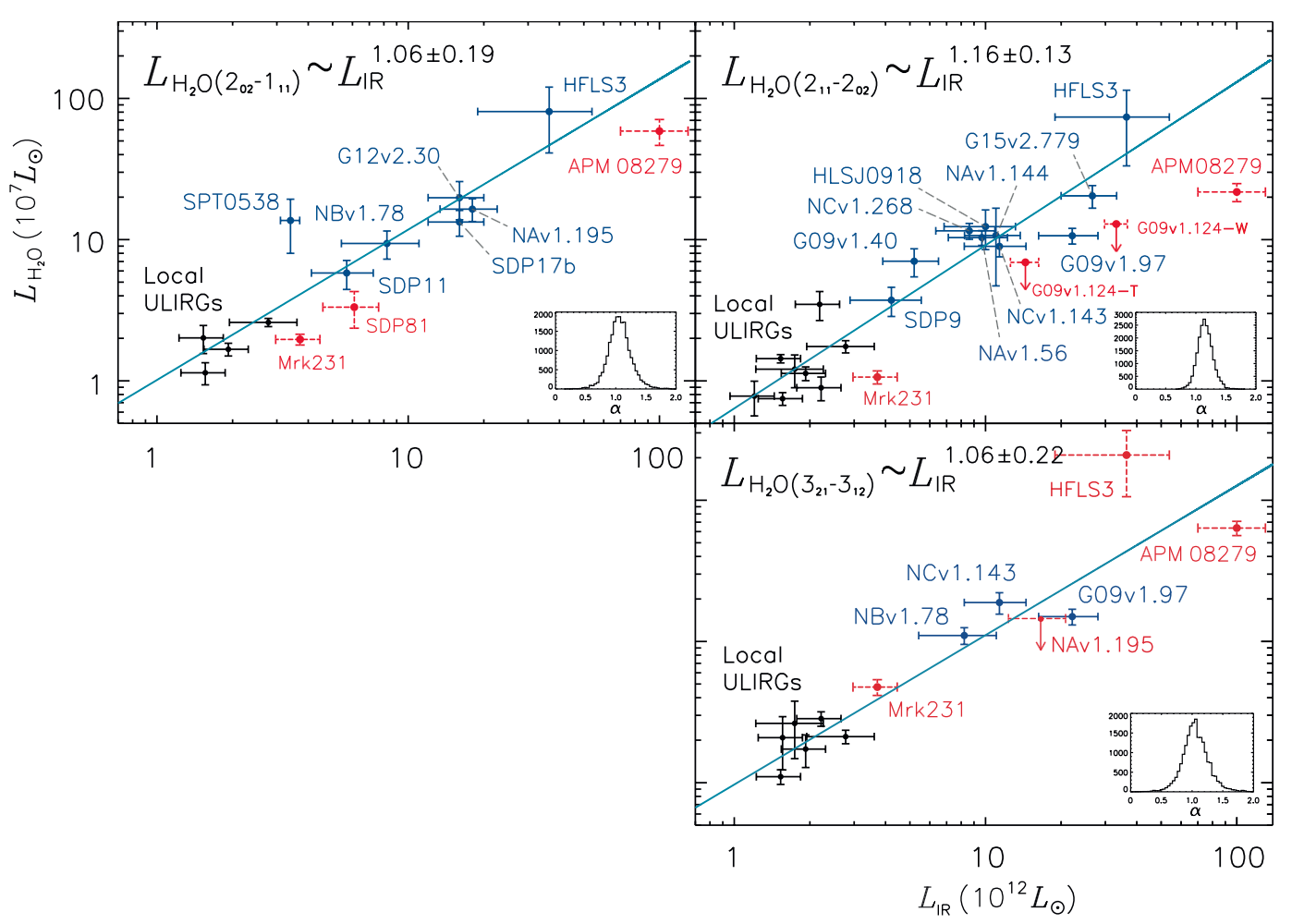 Figure adapted from Yang et al. 2016, which shows the correlation between infrared and water line luminosities in local and high-redshift dusty star-forming galaxies. The black points represent the local sample from Yang et al. 2013. The blue points with solid error bars are from this work. The light blue lines show the fitted line with slopes indicated per subfigure. 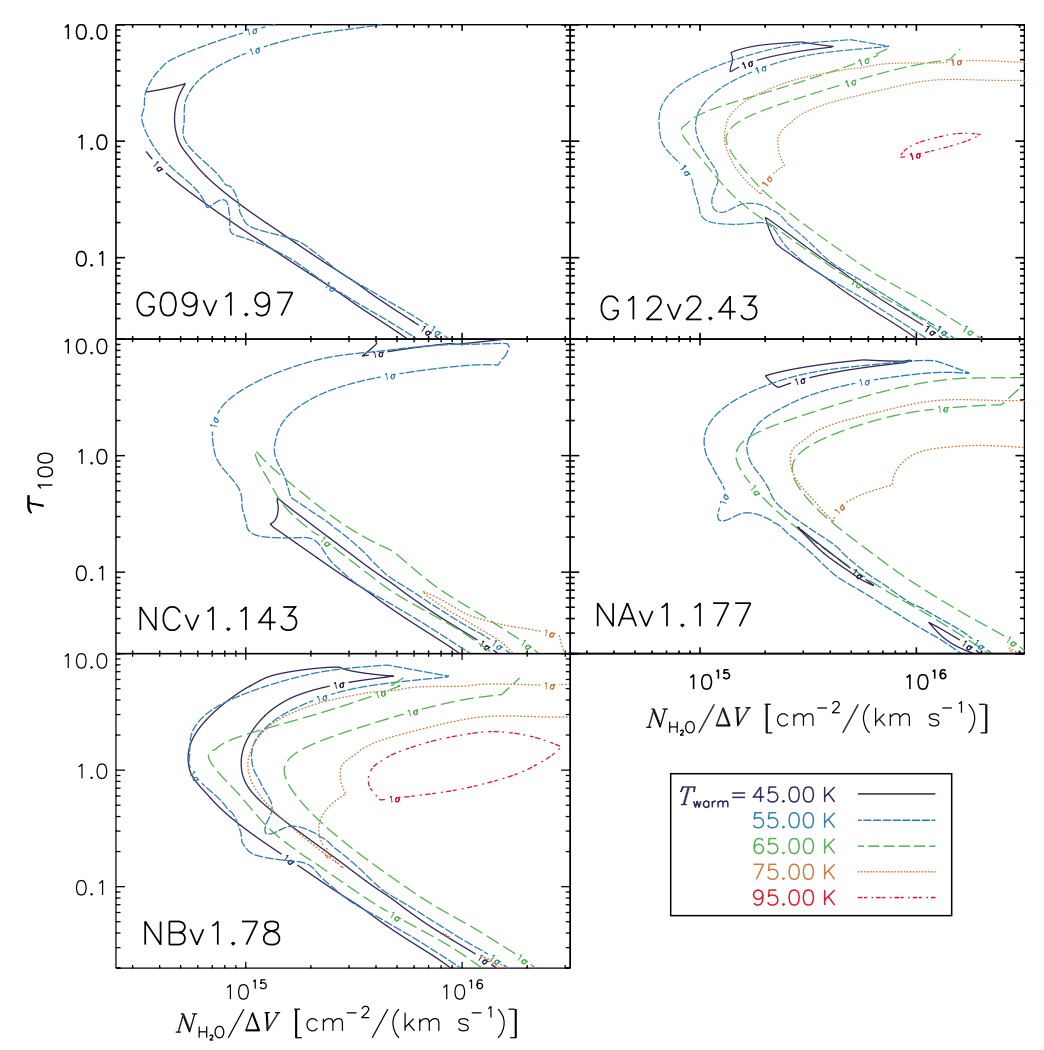 Figure adapted from Yang et al. 2016, showing the parameter space of the water excitation model. ±1σ contours are shown for each plot. Different colors with different line styles represent different temperature components of the warm dust, as shown in the legend. The explored warm dust temperature range is from 35 K to 115 K. The temperature contours that are unable to fit the data are not shown in this figure. From the figure, we are able to constrain the dust optical depth, dust temperature, and water column density. However, there are strong degeneracies. Thus, we need additional information, such as the velocity-integrated flux densities of J ≥ 4 H2O lines, to better constrain the physical parameters.

Resolving the structure with ALMA 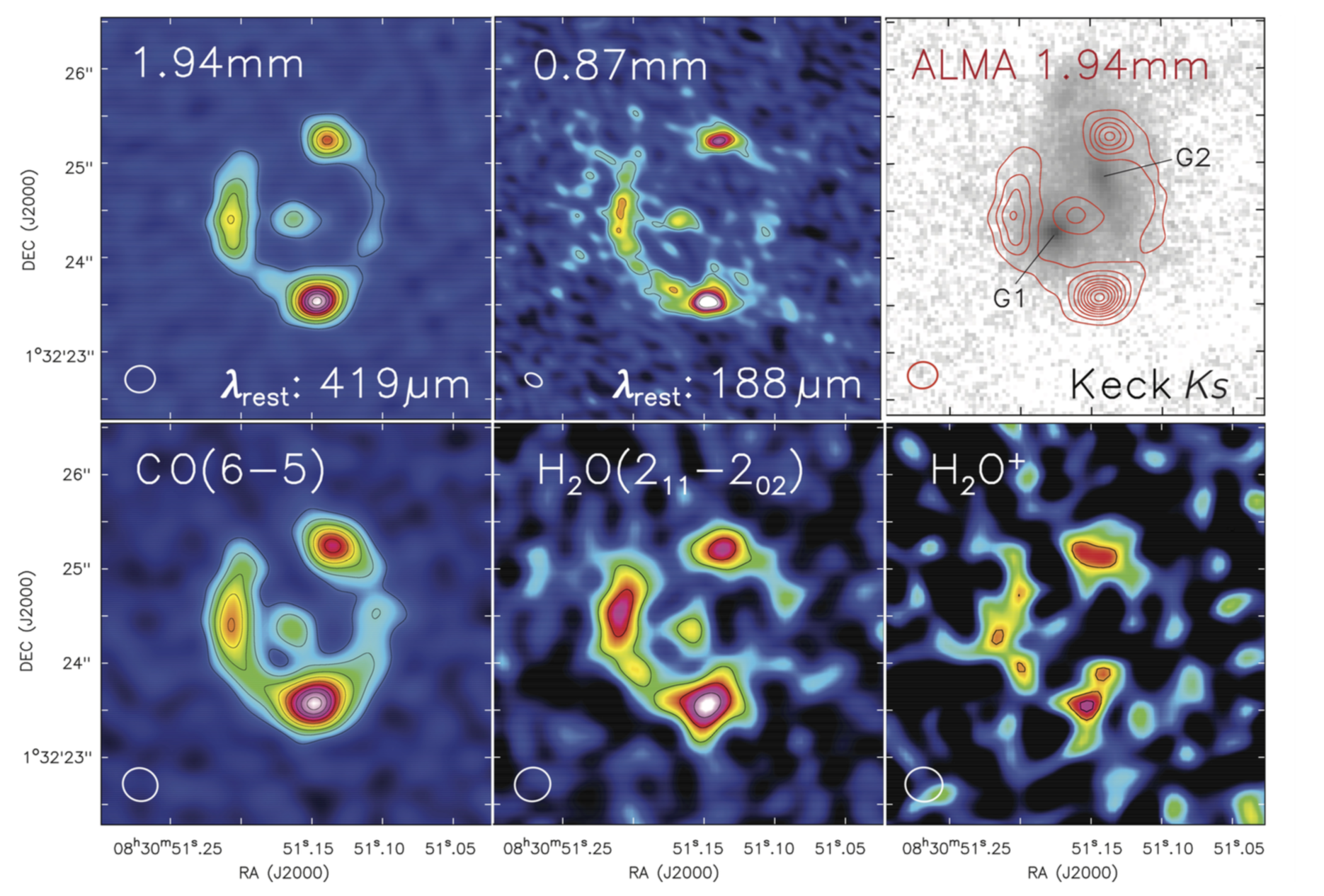 Figure adapted from Yang et al. 2019, which shows the velocity gradient and dispersion of the CO and water emission lines. As a comparison, their velocity characteristics are similar.


To reconstruct the intrinsic image of the galaxy, we use the lens modeling methods developed by Gavazzi et al. 2011, with an MCMC approach, we rebuild the images in the source plane. The source turns out to be a very compact gas-rich major merger. While the cold dust emission is peaking in between two galaxies, in the interacting front, the CO and H\(_\mathsf{2}\)O gas emission are peaking at the centers of each galaxy. This galaxy is a high redshift analogue, yet much more dusty and has a much higher star formation rate, to the Antennae galaxies. 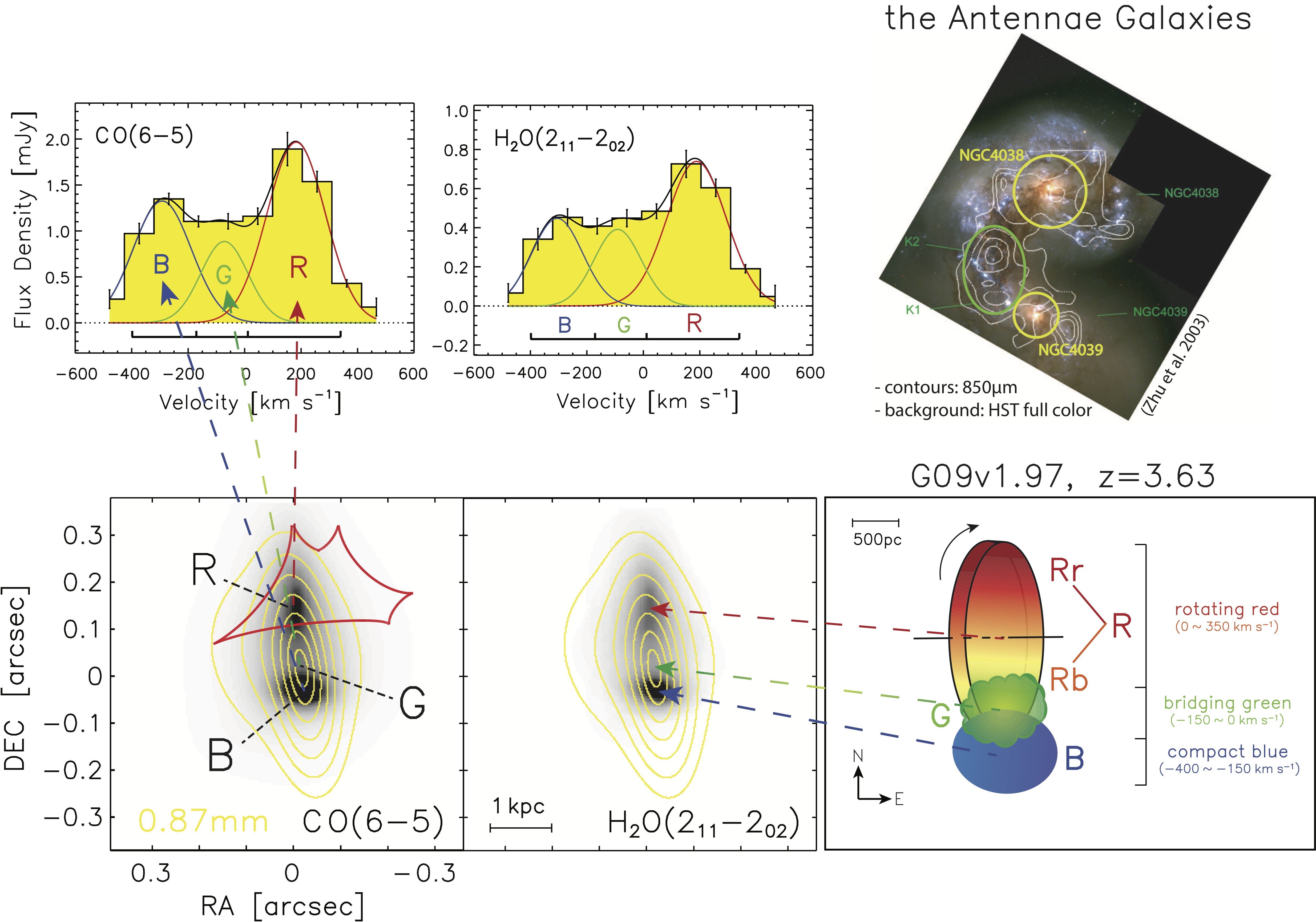 The two spectra in the upper left panels show the spatially integrated spectra of CO and water in the source plane (i.e., intrinsic). Below is the lens-model-reconstructed image of the velocity-integrated map of CO and water (background) overlaid with dust emission (yellow contour). On the right side, upper image is the prototype galaxy merging system -- the Antennae Galaxies, while the lower panel displays the sketch of the G09v1.97, showing three velocity components from the northern redshifted rotating disk "R", the southern blue-shifted compact galaxy "B", and the bridging gas "G".

Water lines are unique probes of the ISM conditions. In some cases, we can infer the structures of the ISM from spatially integrated observations (without any resolved maps) of multiple transitions of the H\(_\mathsf{2}\)O lines.

Recently, we have detected the 448 GHz H\(_\mathsf{2}\)O(4\(_\mathsf{23}\)-3\(_\mathsf{30}\)) at high redshift for the first time (Yang et al. 2020), following the first detection in space by Pereira-Santaella et al. 2017 in ESO 320-G030. This 448 GHz transition is especially interesting because it can probe the deeply buried galaxy nuclei since the line requires high far-infrared optical depths to be excited. Using four water lines in total and the far-infrared/submillimeter/millimeter photometric data, we build a radiative transfer model that resolves the structure of the dusty ISM in the galaxy, which is composited of an optically thin 1 kpc disk with moderate dust temperature of 50 K and a very compact optically thick core with high dust temperature about 100 K. The disk component dominates the infrared radiation in total, yet the surface density of the infrared luminosity is much higher in the core, which has the characteristic properties of an Eddington-limited starburst.

Figure adapted from Yang et al. 2020, showing the observed spectrum, observed and modeled water SLED, and the results from modeling the excitation of the water lines. The model sketch is described in the bottom left panel, while the right panel shows the parameter distribution.

CO lines are very useful for us to understand the properties of the molecular gas. By observing multiple transitions of the CO lines, namely the CO SLED, we can infer the excitation conditions of the molecular gas such as density, kinematic temperature. Here we conducted a large-sample study of CO SLEDs in 16 high-redshift (\(z\sim2-4\)) strongly lensed dusty star-forming galaxies (Yang et al. 2017). 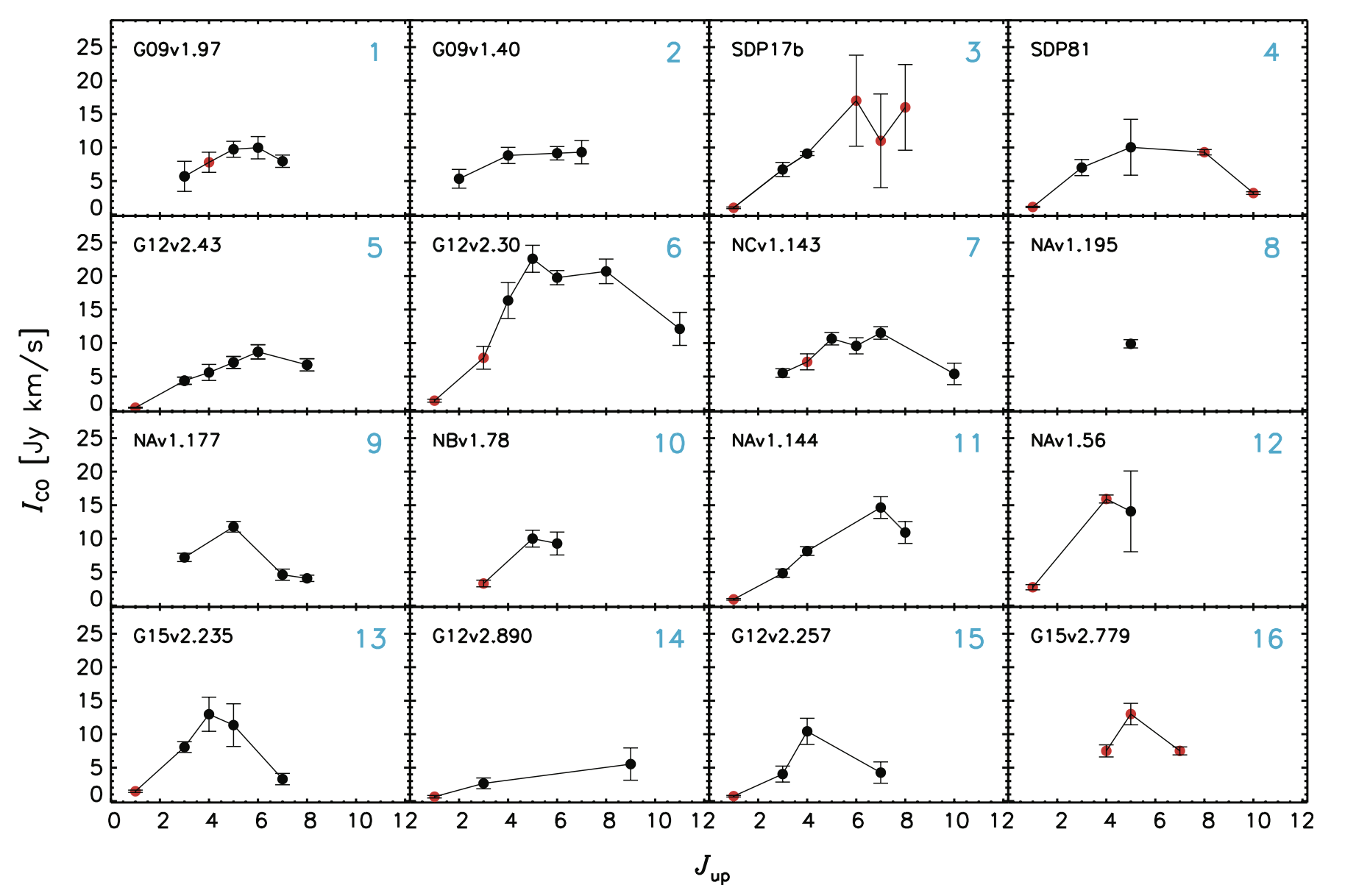 Figure adapted from Yang et al. 2017. The figure shows the distribution of the observed velocity-integrated CO line flux density versus the rotational quantum number Jup for each transition, i.e., CO SLEDs. Black dots with error bars are the velocity integrated flux densities from this work. Red dots are the data from other works. 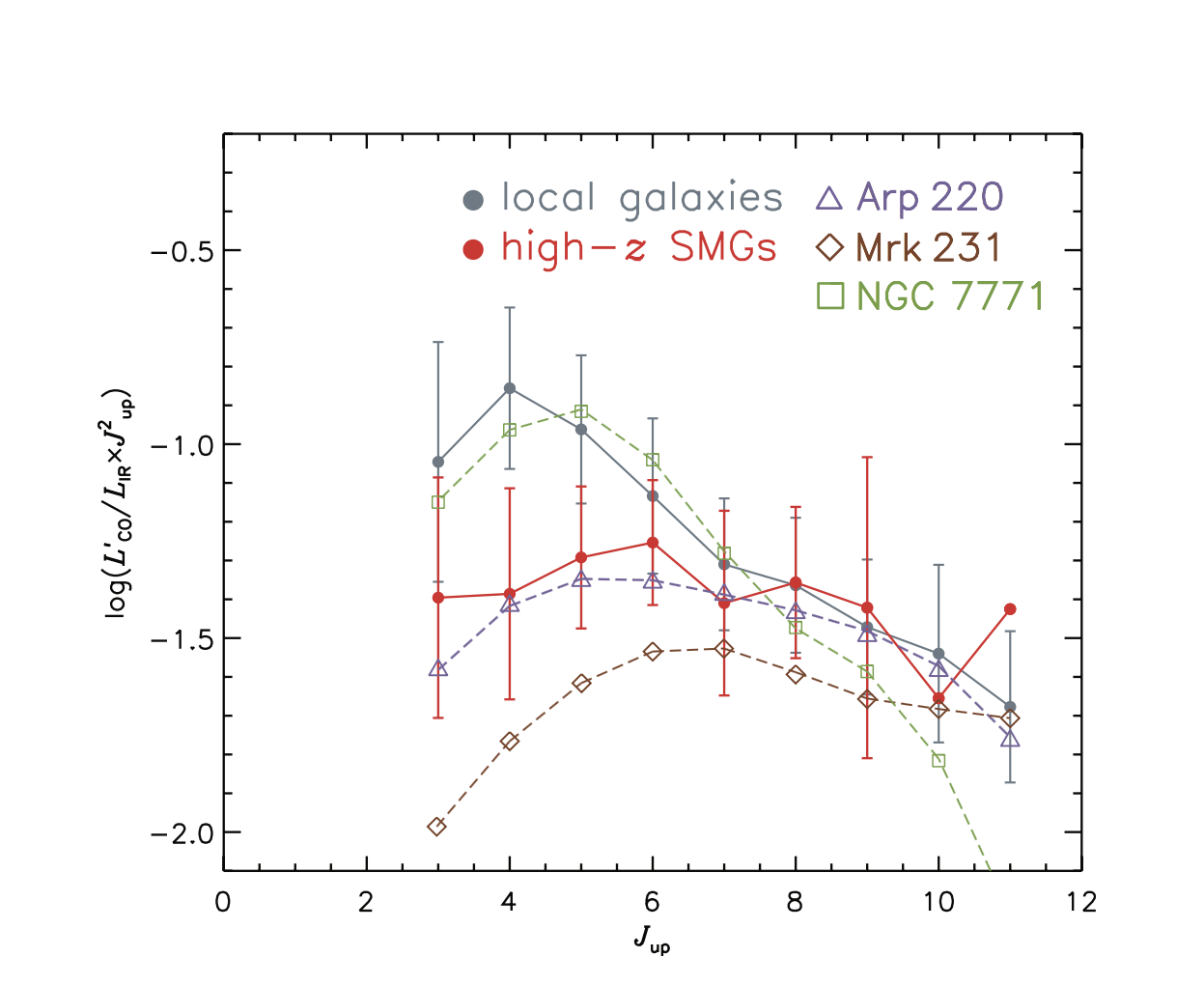 
To model the CO excitation, we have applied the LVG modeling with the RADEX code, with an MCMC approach with the emcee package (see our RADEX+emcee code here). The advantage of directly combining RADEX with emcee compared to the grid approach is that the parameter space will be explored more thoroughly. 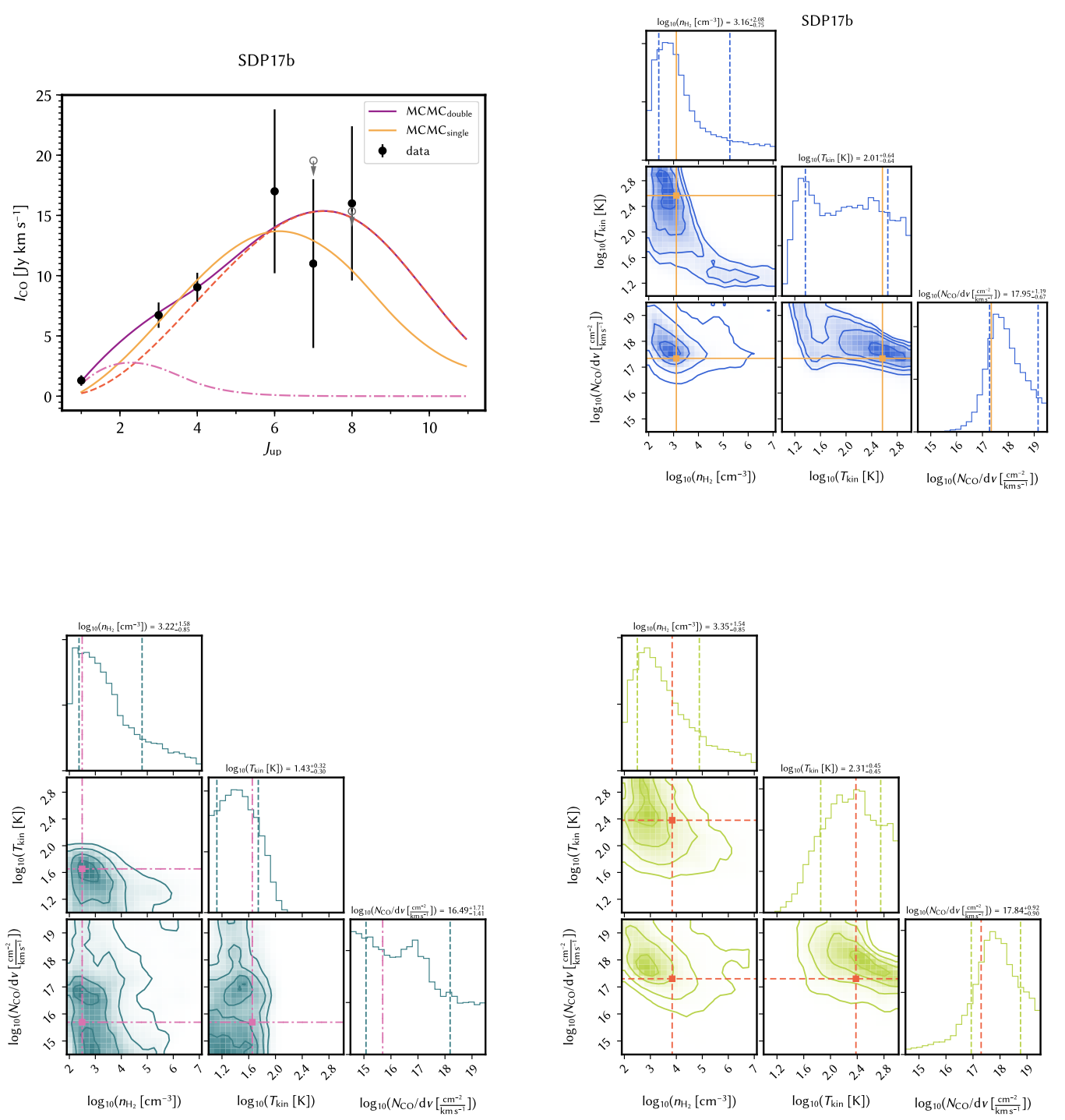 Figure adapted from Yang et al. 2017. The figure shows the LVG modeling results. Upper left panel: The CO SLED of each source is plotted in black. The solid orange curve shows the best fit from the single component model corresponding to the maximum posterior possibility, while the solid purple line shows the best fit of the two-component model. Dashed red line shows the warmer component and the dashed-dotted line shows the cooler component fit. The upper limits are shown in grey open circles with downward arrows. Upper right panel: The posterior probability distributions of molecular gas density, kinematic temperature and CO column density per velocity of the source, with the maximum posterior possibility point in the parameter space shown in orange lines and points. The contours are in 0.5-σ steps starting from the center. Lower panels: The posterior probability distributions for nH2, Tkin and NCO/dv of the cooler (dark green) and warmer (light green) component of the two-component model.


Analyzing the extracted physical conditions, we find a tight correlation between the gas pressure and the star formation efficiency, after including some nearby galaxies. This suggests that the thermal pressure of the bulk of molecular gas is playing an important role in regulating the star formation at galactic scales across a range of redshifts.

I am currently part of the HIDDeN (PI: Prof. Susanne Aalto), studying the < 10 pc scale structures and kinematics of the most dusty-obscured galactic nuclei across cosmic time, with ALMA observations of unique tracers of dense gas like HCN, HCO\(^+\), HCN-VIB, CH3OH, HC\(_3\)N, HNC, CH\(_2\)NH.